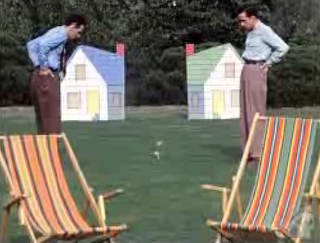 Neighbors is the film equivalent of John Lennon’s Imagine. McLaren wanted to bring about change in times of war. Love thy neighbor is the main theme of this short after two neighbors fight over a flower that has grown on their property line. The films opens with two men reading their newspapers, one is reading a story on peace, the other on war. After discovering the flower, each man takes a turn smelling it. The flower and its scent make them so happy that they begin floating around their yard. The need to possess this flower overcomes them so one builds a fence to establish limits. However they cannot agree on where to draw this line. The theme is relevant even today. Wars will always be fought over land, whether it be on a world wide scale, or with your current neighbor. In the film each neighbor has become obsessed with owning an extra inch of land that they will fight to the death for it, eventually crushing and killing the very thing that they were fighting over. The men go so far as to murder each other’s families in the process to inflict revenge upon the other. Even though Rhythemetic is shown more to the youth in schools, I think Neighbors should be.