These two films are portraits of an immigrant working in Canada. Paul Tomkowicz works as a mini biography, or “a day in the life of”. To me the film is a portrait of loneliness. The unscripted random stories of Paul Tomkowicz voiced over images of him sweeping the tracks seemed like a lonely old man telling his story to whomever will listen. He never mentions that he has a family, or has any definite plans for the future. He is going to be retiring soon, but the biggest aspiration he has is “maybe taking a trip next year” On his day off, he will maybe stay home or go see a sho 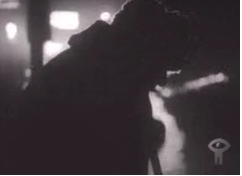 w alone. I really felt sorry for this man. It made me think of Jack Nicholson’s character in About Schmidt The film is about how empty this man’s life is now that he is retired. I felt like Paul was going to end up like this character. He has no family at home, and has no plans after retirement, so what is he going to do? The film also had a good message about the role of immigrants in Canada’s work force. To me it showed a job that I never new existed and to be grateful for men like this, that he has an impeccable work ethic and makes the life of the Canadian commuter easier. The soundtrack was exceptional. The sounds of the wind, snow and the train on the tracks were memorable. There was extensive use of mixing, diegetic and non-diegetic music like the jazz music in the café.
Luckily I Need Little Sleep is a similar film. It portrays an immigrant and her busy work schedule. This film and its issue is still valid today. Women (and men for that matter) wake up early for work, get their children ready for daycare, and off they go. Finishing work at 5pm they then go back to daycare pick up their children, go home to make supper, help with homework, bathe them and get them to bed at a decent time is a trying chore. In betwee 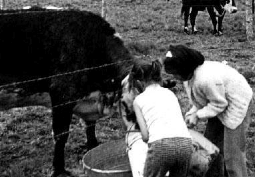 n all of this are the regular household chores that need to be done such as dishes and laundry. In the case of this film our main character lived on a farm, which greatly increases her workload. The film’s soundtrack is different from Paul Tomkowicz in that it does not use external music. The soundtrack is the woman talking, at times there are video inserts such as a wedding photo when she talks about her husband. This film hints at the issue of women needing more time to properly care for children and run a house, but when it comes time to her saying what needs to be done to begin solving the issue the film ends. Paul Tomkowicz: Street Railway Switchman is my favorite of the two film mainly because I felt empathy for this character and it’s soundtrack was more complex than Luckily I Need Little Sleep.
Posted by Corey Dufort at 3:30 PM

you did not understand the first movie; the fact that you spice up your review with film theory vocabulary does not actually make up for that.

A person essentially assist to make significantly posts I would state. That is the first time I frequented your website page and thus far? I amazed with the analysis you made to create this actual publish incredible. Wonderful job!
Magnificent site. Plenty of useful information here. I am sending it to some pals ans additionally sharing in delicious. And naturally, thank you on your effort!
hello!,I like your writing very a lot! share we keep up a correspondence more approximately your post on AOL? I need an expert in this house to resolve my problem. Maybe that is you! Looking ahead to peer you.

This is very interesting, You are a very skilled blogger.
I have joined your feed and look forward
to seeking more of your wonderful post. Also, I have shared your
website in my social networks!

This design is steller! You most certainly know how to keep a reader amused.

Between your wit and your videos, I was almost moved to start my own blog (well, almost...HaHa!) Fantastic job.
I really loved what you had to say, and more than that, how you
presented it. Too cool!